We are big fans of this playful twist on a classic herringbone print. This perfectly – imperfect, hand-drawn print in peachy pink and white provides the perfect minimalist background for any room – from nursery, to child’s playroom, to powder room, to front entrance, and everything in-between. Plus, did you know that our Canadian-crafted Peel & Stick Wallpaper contains no PVC, is non-toxic, is LEED-certified, and is phthalates-free? As well, our removable wallpaper rolls come in 8ft or 10ft length.

In search of a neutral wallpaper print with a twist? Look no further! The Peach Herringbone Peel & Stick wallpaper will be a perfect fit! Its peachy-pink lines on a soft white background add visual interest to any space as the pattern can look like a solid colour from far away but, as you approach, the full details of this geometric print start to unfold. Plus, because the Peach Herringbone wallpaper is a neutral, it is an ideal fit for any room in your home – from your bedroom, to hallway, to children’s playroom, to entranceway, bathroom, living room, office and more! Plus, herringbone print has been popular for centuries and isn’t going anywhere any time soon! Trust us, or trust history! Either way, this pattern isn’t going out of style any time soon!

Looking for an additional design hack? Order extra Peach Herringbone wallpaper and utilize some of these great tips and tricks from HGTV’s article, “The 8 Best Uses For Your Wallpaper That Don’t Involve Walls“. Happy wallpapering!

It is scientifically proven that the interior design within our homes can have a tremendous effect on both our physical AND mental health.  As such, providing superior interior design options is something the team at Hello Sticky finds incredibly important and takes to heart when carefully curating each of our designer wallpapers. After all, we want the best for you, your family, and your guests. That’s why we designed this Peach Herringbone wallpaper. So, if you are looking for a neutral, feminine wallpaper that oozes elegance and class, this Peach Herringbone wallpaper is the one for you!

The peachy-pink stripes on a soft white background in this Peach Herringbone wallpaper provide a playful and yet subtle backdrop to any room! Plus, if you happen to have any wallpaper left over after installing it in your room of choice, why not try one of the adorable DIY ideas to upcycle other spaces/items in your home from our blog post, “Top 5 Ways To Use Wallpaper To Upcycle Items In Your Home“? Trust us, you won’t regret it!

Do you know the difference between chevron and herringbone? It’s an important distinction to be made as the two patterns are commonly mistaken for one another. Simply put, herringbone has line breaks in the zig-zag pattern, chevron does not. See the difference?

Also, have you ever wondered where the Herringbone name and idea came from? First, the name is due to the visual similarity between the pattern and the herring fish’s bone structure. And, this print is anything but “new”. It has been around since the Roman Empire utilized the rectangle/parallelogram arrangement of the herringbone print in their paving as it can absorb compression when things are on top of it – in fact, many of these streets are still in use today! It was also popular amongst the Ancient Egyptians who used it in their jewelry design and then, of course, the Ancient Italians and Irish who utilized the print in fabrics. With respect to interior design, the herringbone print became popular in flooring in the 1600s in France as a way to exude status and elegance. And, those feelings still run true for the herringbone print – it is full of class and would look ah-mazing on your walls.

So, why not invite the subtle and oh-so-stunning Peach Herringbone Peel & Stick removable wallpaper into your home? It will bring a playful and feminine sophistication to any and every room and is sure to make you smile!

Plus, did you know that our Canadian-crafted Peel & Stick wallpaper is a sustainable choice? It is non-toxic, phthalates-free, contains no PVC, and LEED Certified, so your wallpaper choices won’t hurt the environment. PEACHY! As well, our Peel & Stick wallpaper – which comes in rolls of 8ft or 10ft length – is repositionable which means installation (and eventual removal) is a breeze. So, whether your heart is set on this Peach Herringbone wallpaper for a day, week, month, or a decade, you will be thrilled with this designer wallpaper choice! 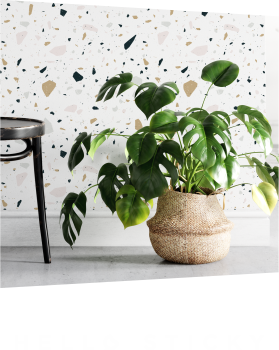 Stick with us for daily inspiration and peel-good interior design tips.

Our Peel & Stick wallpaper is not only easy on the eyes, but also:

thanks to its inability to shrink, curl, rip or wrinkle meaning it is completely repositionable during install. You literally can’t mess it up!

As well, since zero glues are used during the installation, it goes up easy and comes down clean without damaging your existing walls. See our full wallpaper Installation Guide here.

So, whether you need to add a new splash of life in your home for a day or a decade, Hello Sticky is here for you.

How to measure your walls

We know walls come in all shapes and sizes and we certainly do not discriminate. For tips on measuring different wall types for our Peel & Stick removable wallpaper, scroll through the following sketches: 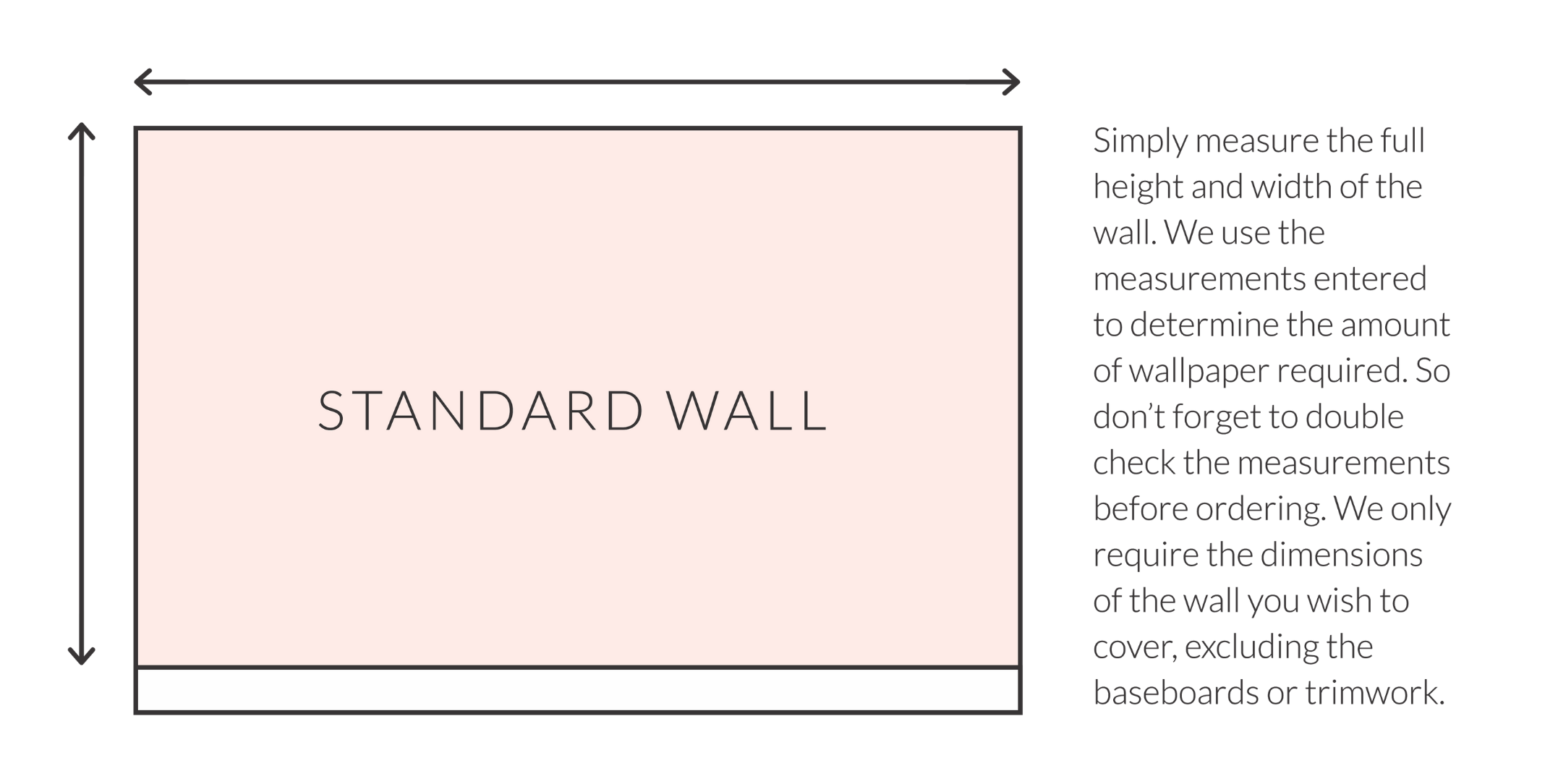 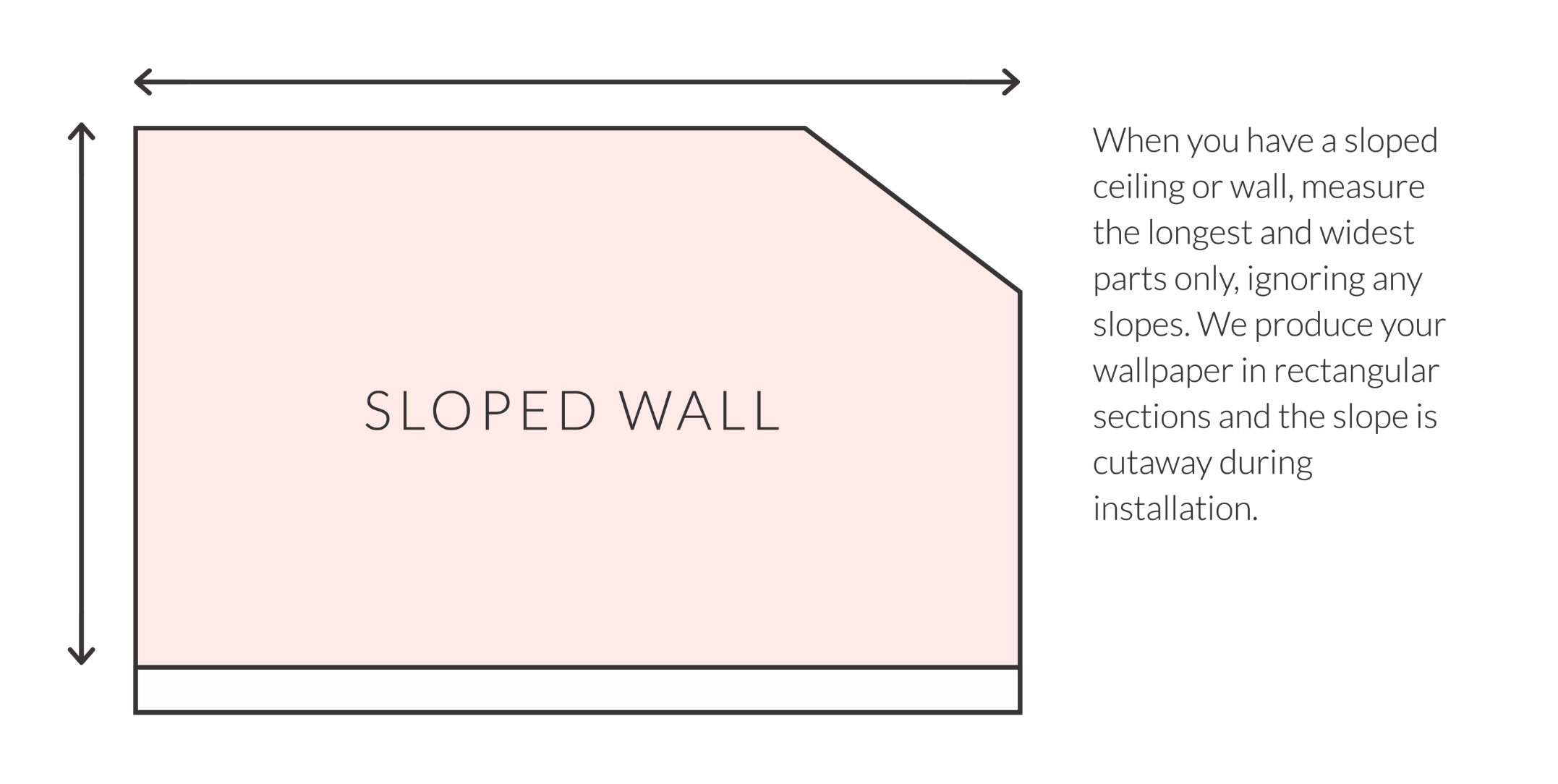 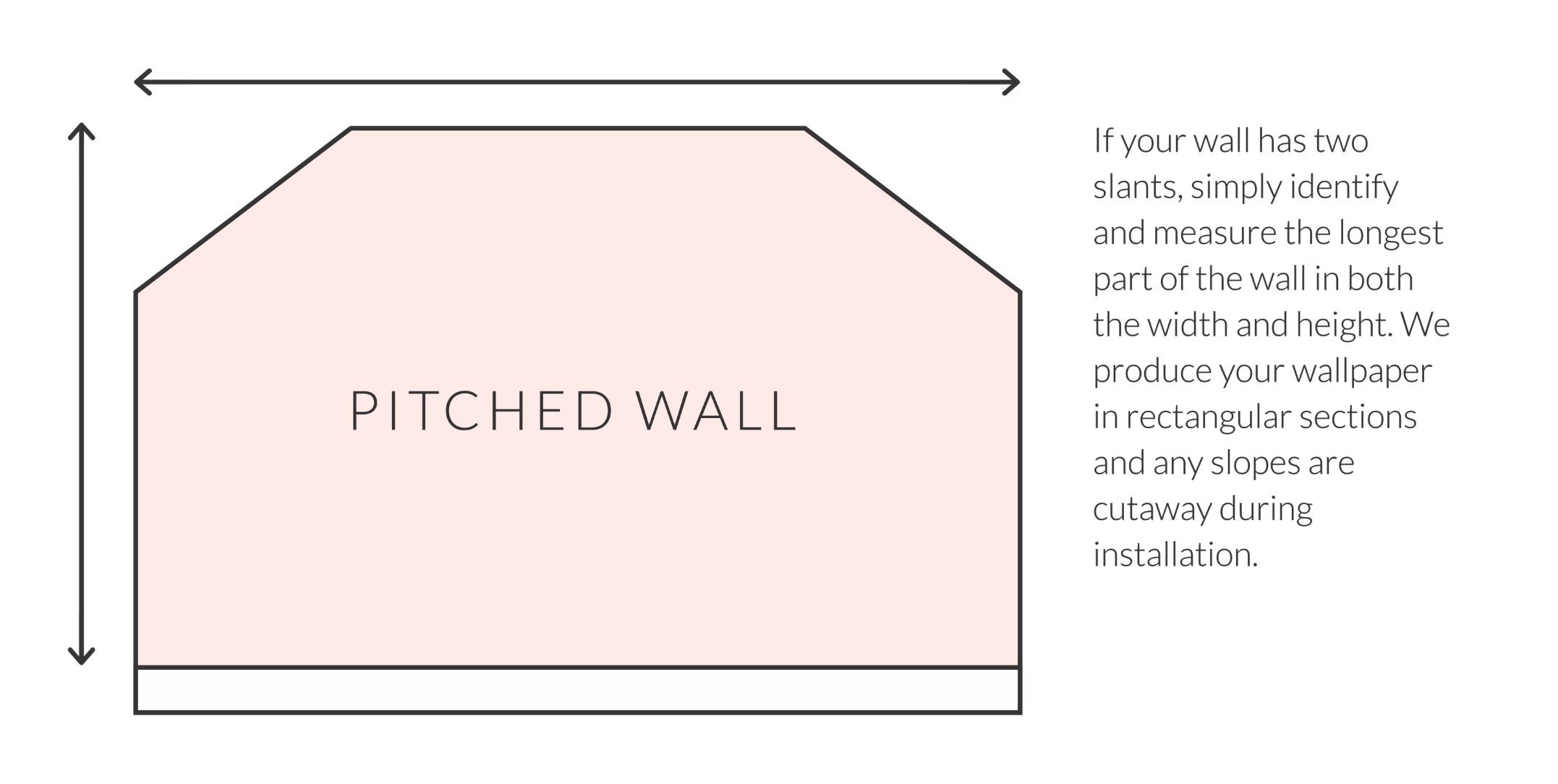 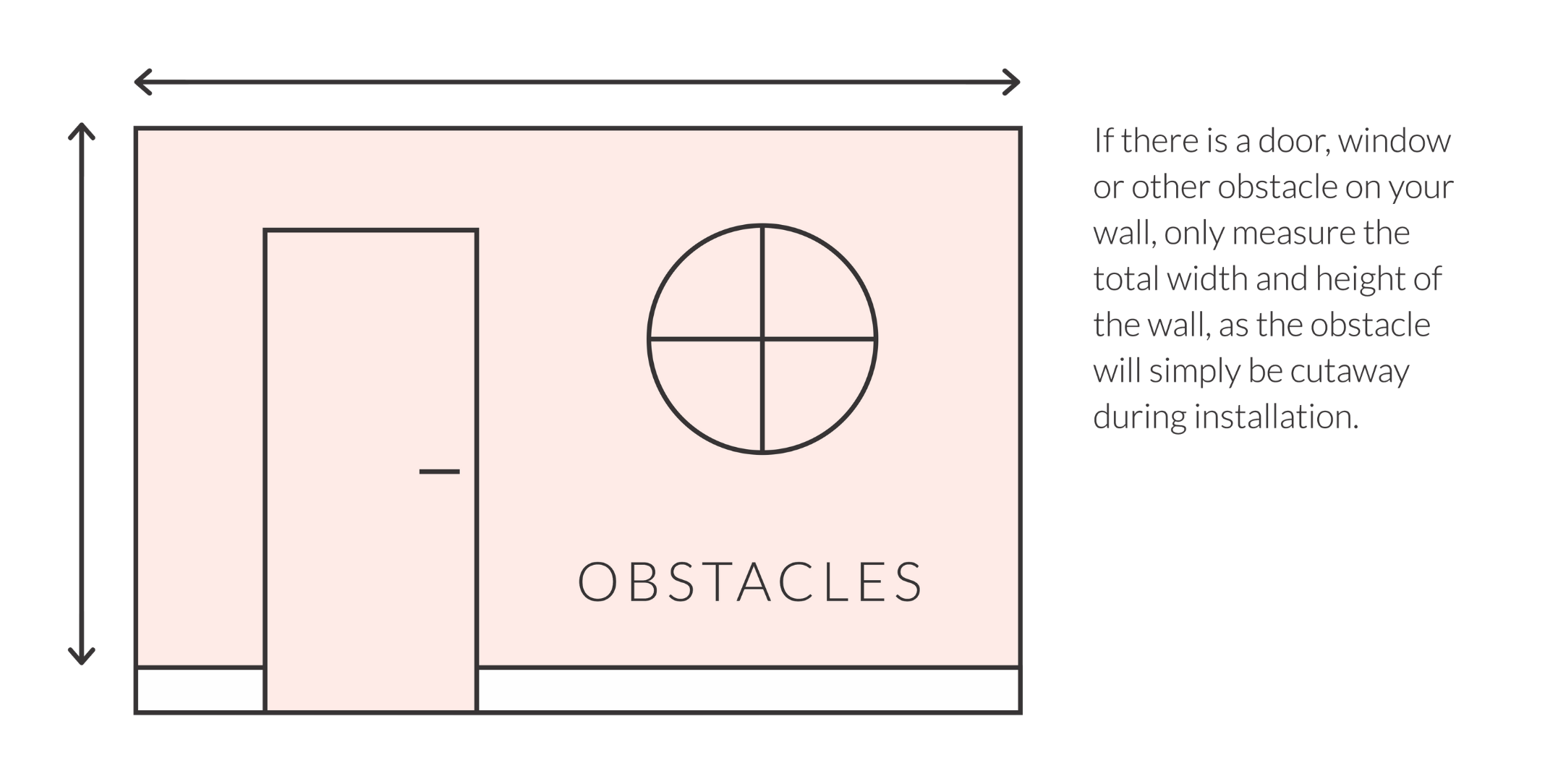 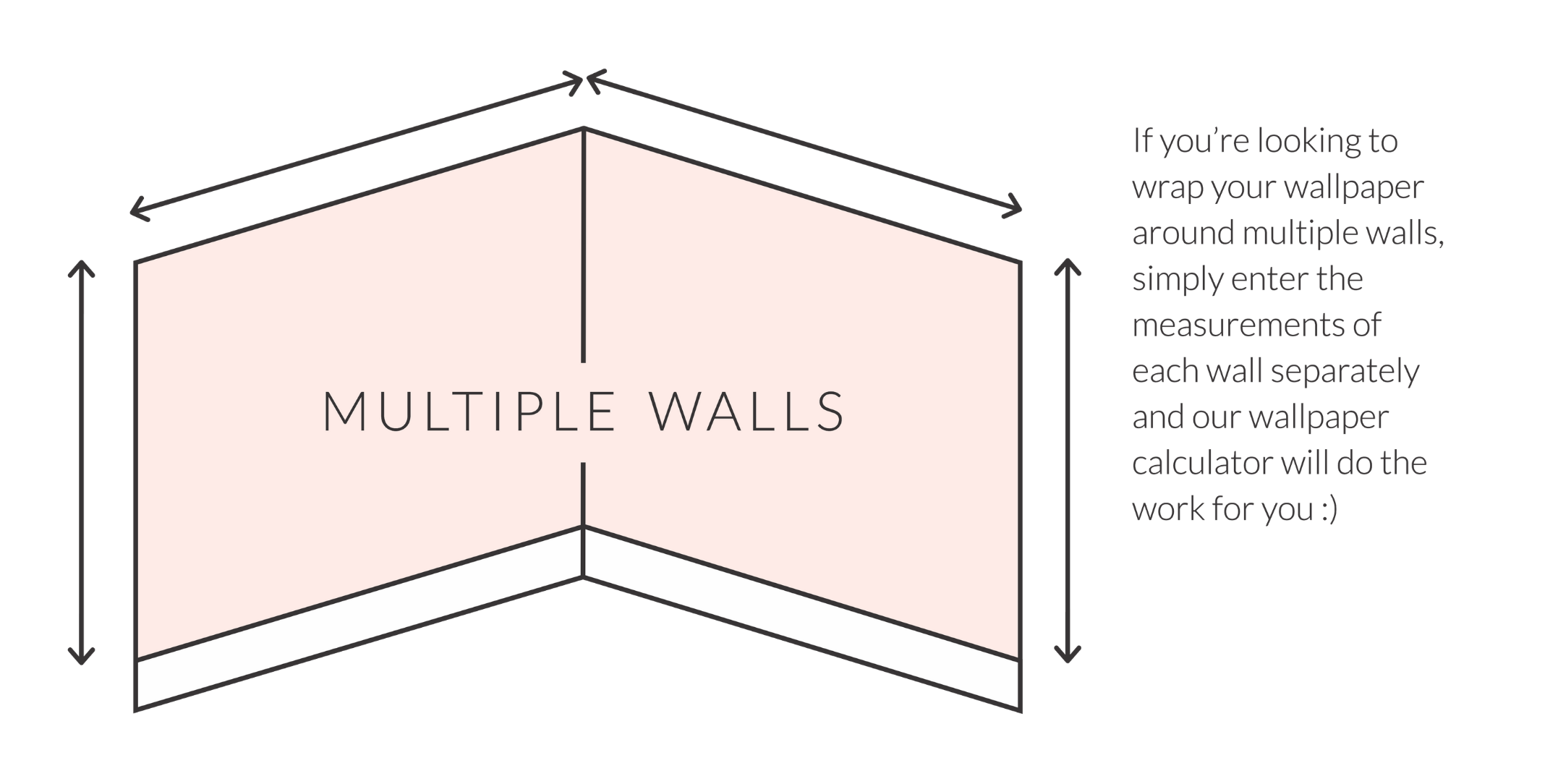 You can peel-good about your Peel & Stick removable and repositionable wallpaper purchase. Below are our wallpaper specifications:

Our Peel & Stick removable wallpaper is 100% polyester fabric meaning it contains no plastic! As such, it is environmentally safe and biodegradable, contains no PVC or VOCs, is nontoxic, phthalates-free and LEED Certified.

While our Peel & Stick wallpaper can be put up in bathrooms (or other areas where things are gettin’ steamy!) it does best if there is some ventilation. So, make sure to crack a window or turn on the fan so you can enjoy your new wallpaper well into the future!

Our Peel & Stick wallpaper comes on rolls that are either 8ft (96in) length by 24 ¾ inch width OR 10ft (120in) length by 24 3/4in width. To make things nice and simple for you, we have created a custom wall coverage calculator which you will use during the checkout process. This calculator will tell you exactly how many rolls you need (and what size!), plus it will ensure you won’t have to worry about any pesky horizontal seams when you go to install – BONUS!

Colours may differ from screen to screen so please reference the Pantone number shown on each product page for reference. As well, while our Peel & Stick removable wallpaper will be printed to match the Pantone colour swatch included in its product images, a slight variance of up to two points in either direction is possible. As such, it is important to ensure all wallpaper is ordered at the same time as slight colour variations may occur in the same product purchased at different times.

We care deeply for the environment so we are proud that our wallpaper is 100% polyester fabric meaning it contains no plastic. As such, it is environmentally safe and biodegradable over time, contains no PVC, is nontoxic and phthalates-free. As well, since the use of Peel and Stick wallpaper promotes upcycling of existing items/spaces in your home vs. a tear-out and replace mentality, we are hoping to reduce the number of items reaching our landfills each and every year. Afterall, we are striving to make the world a more sustainable place, one wall at a time.

Peach Herringbone has been added to your cart 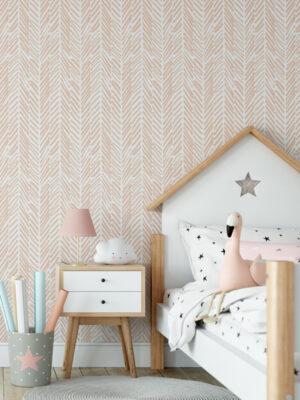 Get into a sticky frame of mind with... Peach Herringbone 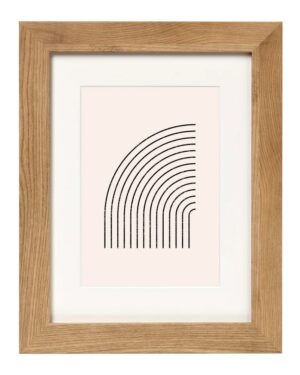 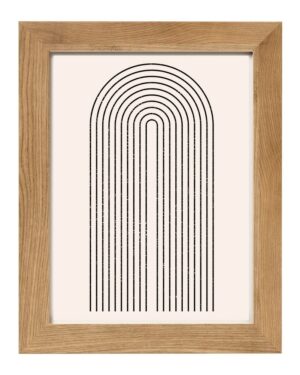 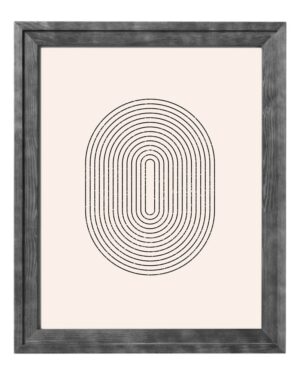